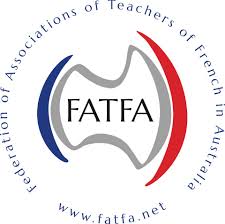 FIPF is the acronym of the Federation Internationale des Professeurs de Français.  It has more than 80,000 members around the world.  Recently, the FIPF celebrated its 40th birthday in Paris.  To streamline the management of it membership, it is divided in Commissions to represent its associations around the world.  Each Commission usually has an executive committee with a president, vice-president and secretary each from different associations.  The Commissions are :

The CAP, Commission pour l’Asie-Pacifique, regroups French associations from some 21 countries, from the Asia Pacific region of the world.  FATFA (Federations of Associations of Teachers of French in Australia) belongs to the CAP and was formed to regroup (federate) all (most at least) French associations in Australia.  The 1st CAP Conference was held in Taiwan in April 2006.  The 2nd Conference will be held in Sydney, NSW in December 2010

The project for a Federation of Teachers of French in Australia was consolidated in 2001 at the French Teachers’ Conference in Melbourne and went ahead to become FATFA, the constitution of which was finalised in 2004 in Adelaide.

FATFA has grown since early days.  It has :
• a national identity on the international scene through FIPF
• a conference every 2nd year
• an e-platform for professional interchange of ideas and concerns
With the collaboration of its members and board members and the creation of its website, it should :
• offer a national calendar of events for French teachers in Australia
• increase contacts between State Associations in the primary, secondary and tertiary sectors
• support all kinds of exchanges
• create possibilities of further interaction such as national competitions
It may also develop further its own national identity on the political domestic scene.